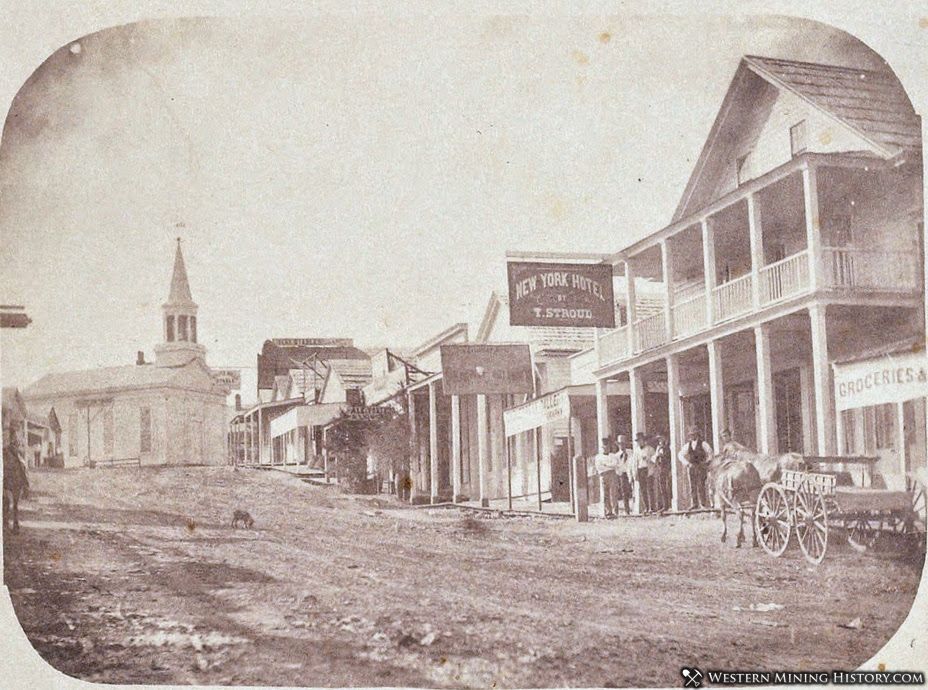 Miners began finding gold along Deer Creek, a tributary of the South Yuba River, in 1849. A cabin was built at the confluence of Gold Run and Deer Creek in September by a trio of gold miners – John Pennington, William McCaib, and Thomas Cross.

A store opened nearby in the next month to supply the influx of miners. The settlement was called Deer Creek Dry Diggins or Caldwell’s Upper Store. Hundreds of men spent the winter of 1849 to 1850 searching for gold, living mainly in tents or hastily-built huts.

The California legislature authorized the establishment of a town called Nevada (“snow-covered” in Spanish) in Yuba County in 1850. The town’s size was to be no more than three square miles, with the northern and southern boundaries within a mile and a half of the store of Truex and Blackman.

The area was called Ustomah by the local Native American tribe, the Nisenan. Nevada (City) became the county seat for the new county of Nevada in 1851. After the U.S. territory a few miles to the east took the Nevada name in 1861, the California town became Nevada City. 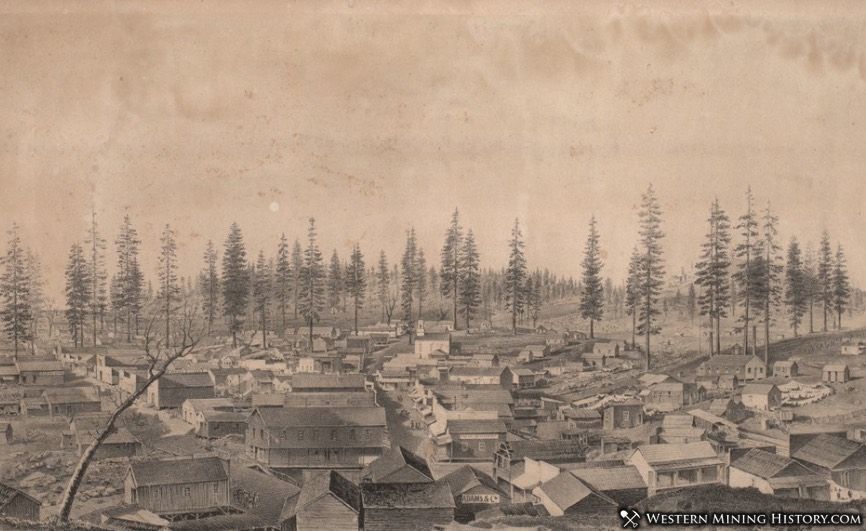 A fire ripped through part of Nevada City early in 1851. A month later, the lower portion of Main Street was rebuilt with “large and substantial buildings” and Main Street had been straightened and widened. This was only the first of seven major fires in the town.

A daily stage coach run between Nevada City and Sacramento began in the spring of 1851 and the first newspaper began publishing in the town in April 1851. Warren B. Ewer, publisher of The Nevada Journal, declared that the newspaper used the “first printing press which has ever been located upon either slope of the Sierra Nevada.”

By 1851, the Nevada City region was separated from Yuba County. Nevada City became the county seat for the new county of Nevada. The Sierra Nevada Mountains occupied the eastern half of the county, and the town was downstream, in the western part of the county. 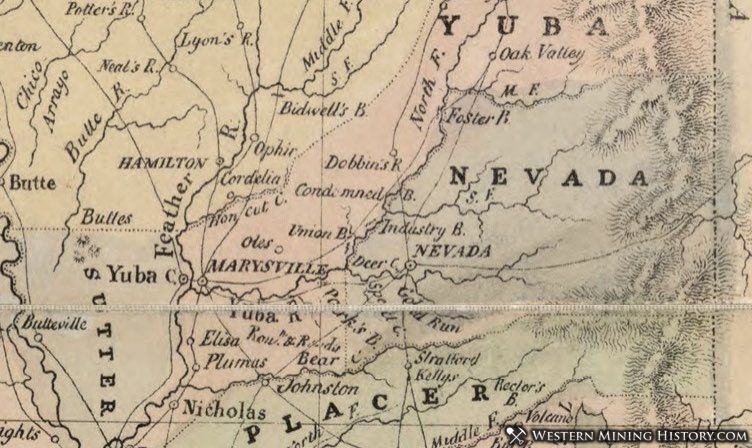 The Not so Wild West

Unlike a lot of other upstart western mining towns, Nevada City was a pretty tame place. Families were soon part of the town’s population and the town’s leaders enacted a number of rules.

Bored and looking to play some team sports? Don’t bother playing baseball or football in the downtown streets or that would cost you 25 dollars or five days in jail, according to the 1860 Ordinance to Prohibit Noisy Amusements.

Plank sidewalks were built in the downtown district. Running cattle or riding horses on the sidewalks was outlawed in 1859 – breaking the rule could get you fined ten dollars or thrown in jail for five days.

If you got thirsty while quietly strolling along the sidewalks in an orderly fashion, you could stop into David Phelp’s Milk Depot for a tall cool drink of milk for only twelve cents a glass. Liquor was kept on hand, though, to make the drinks more interesting. Milk punch “fixed up in the most tasty manner” cost twenty-five cents a glass. After a couple years, the Milk Depot was expanded to offer rooms for travelers in the Express Hotel.

A new saloon was opened in town in 1859 by J.M. Flurshutz – an ice cream and confectionery saloon on Broad Street. The establishment offered a separate room with its own entrance for “ladies and families.”

Mining was hard work and evidently built up a thirst for more than milk. Wherever mining towns sprang up, a brewery was soon to follow. Nevada City was no exception, and had five local breweries.

The Nevada Brewery building was built of granite in 1855 with a granite addition in the 1880s. The building has a granite-lined tunnel and cave built into a hill behind the structure for storing and cooling the beer. Also known as the “Old Stone Brewery,” its days as a brewery ended with Prohibition in 1916. The building, tunnel, and cave have been adapted for use as a restaurant and were listed on the National Register in 1985.

Most of Nevada City – over 400 buildings - was destroyed by fire in July 1856. The National Exchange Hotel on Broad Street was built in three brick buildings and opened in August 1856. The hotel is the oldest continuously-operated hotel in the state and was listed on the National and California historic registers in the 1970s. 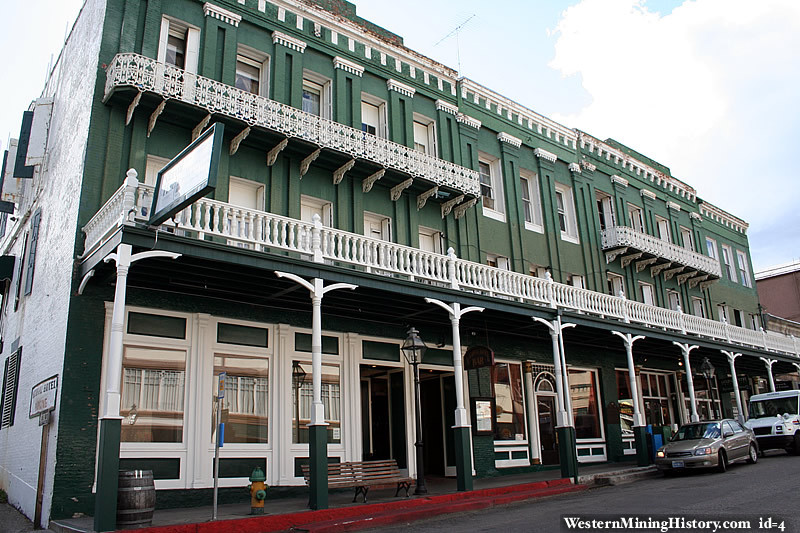 The National Hotel in Nevada City

Over 2,000 votes were cast from Nevada City in the 1856 election, behind only San Francisco and Sacramento. Roughly 10,000 folks may have been living in the town in its heyday of the 1850s. The town expanded to cover seven hills over two square miles and contained a population of over 4,000 by 1880.

A number of ditches or canals stretching for miles were dug near the town in the 1850s for supplying water for agriculture, mining, and people. Three competing water companies merged in 1870 to form the South Yuba Canal Water Company; it later expanded into hydroelectric utilities and eventually merged with Pacific Gas and Electric (P.G.&E.). The water company’s office building built in 1885 on Main Street is a California Historical Landmark. 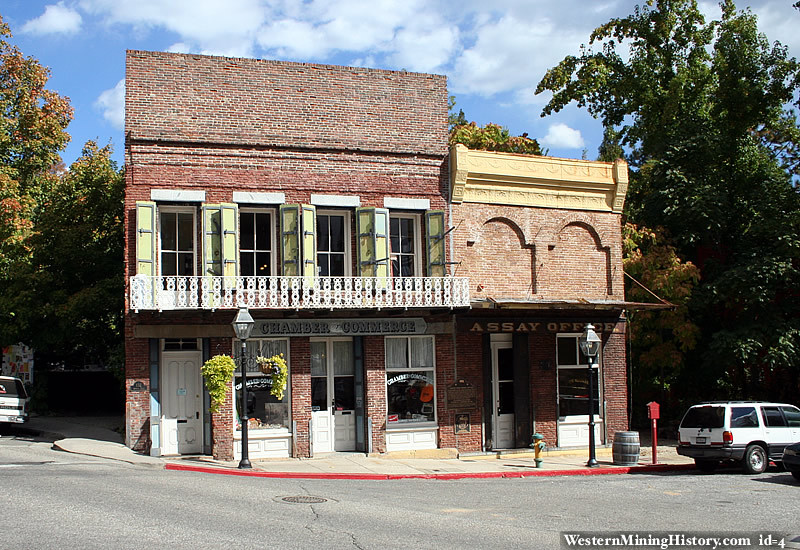 Made in Nevada City

The Miners Foundry on Spring Street in town started out in 1855 as a blacksmith shop and ironworks foundry. It served the mining community by repairing the heavy machinery of the mining trade that was manufactured in the big cities and hauled here.

The foundry building was burned down in 1856 and was rebuilt of stone in 1859, as the Nevada Iron and Brass Foundry and Machine Shop. The business advertised in 1860 that it had “tools superior to those of any other foundry in the mountains.” The company offered steam engines they manufactured themselves and building parts like iron balconies or awning posts.

A new invention, the Pelton Wheel, was first created at the Nevada Foundry in 1879 and proved to be an invaluable addition to the mining trade and to engineering. Lester Pelton designed the device, an iron wheel with buckets spaced to accommodate high velocity jets of water from a nozzle; the water strikes the bucket and turns the wheel. 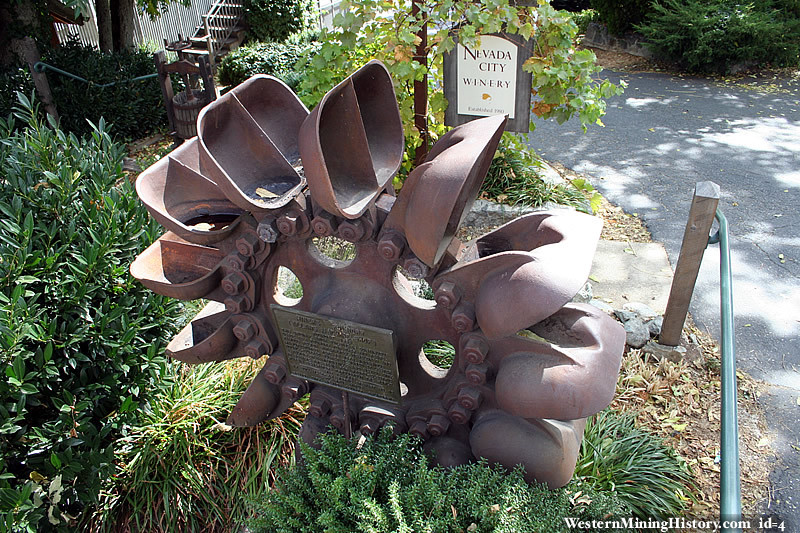 The Pelton Wheel continued to be manufactured in Nevada City until the early twentieth century. The business became the Miners Foundry in 1907 and now houses a cultural museum and community center.

Well before he was president of the country, a young Herbert Hoover worked in Nevada City. After graduating college (Stanford Univeristy class of 1895), the geology and mining engineering-trained lad took a job in the mines near Nevada City. He toiled seventy hours per week, pushing carts loaded with ore. He left town by 1897 and moved on to other jobs in the mining industry.

A fire department wasn’t formally organized in the town until after the late 1850s. Ladies of Nevada City organized events to raise funds for a firehouse including a ball held at the courthouse and a play. Two rival groups of volunteer firefighters fought to have the building erected in their part of town.

Company Number One filed an application to create the Nevada Hose Company in June 1860, beating their rivals by one day. But, Company Number Two finished their building on Broad Street first, in January 1861. Firehouse Number Two was still in use as a firehouse when it was listed on the National Register on May 3, 1974. Since it still stores a firetruck, Number Two is one of the state’s oldest continuing use firehouses. 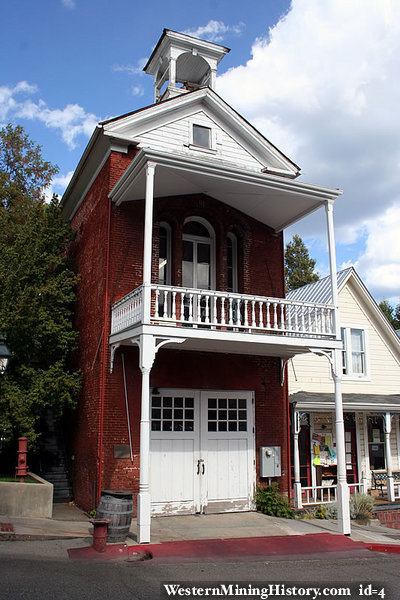 Company Number One also completed constructing their firehouse in 1861 on Main Street. The firehouse, with its neoclassical Greek Revival architecture, served its original purpose until 1938. The building now houses the Firehouse Museum of the county historical society and is said to be the most photographed structure in the town. So maybe the “Number One” guys won the competition after all. 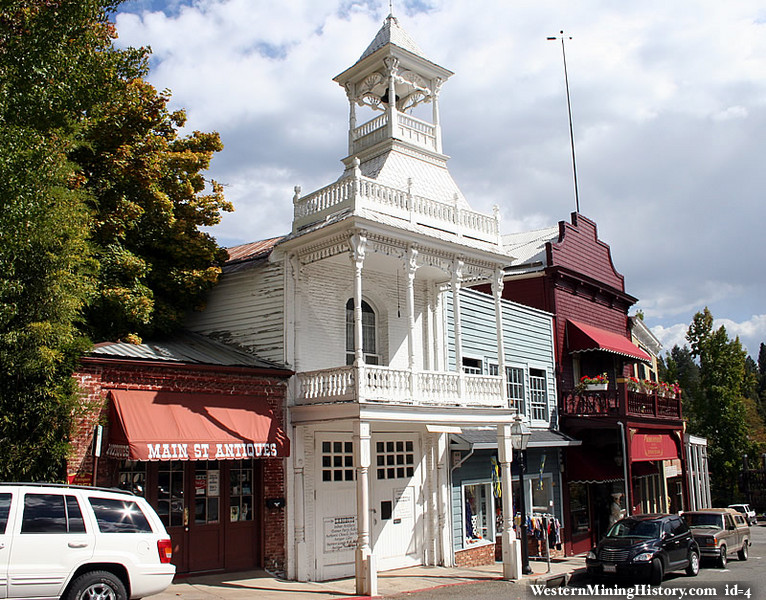 Firehouse Number One in Nevada City

The downtown historic district has been listed on the National Register since 1985 and contains 93 buildings. The Nevada Theater building is the oldest theater building on the West Coast that continues to operate as a theater. For 152 years, the drama just keeps on coming in this landmark at the top of Broad Street.

The venue also hosts live music, movies, weddings and even funerals at times! The Narrow Gauge Railroad Museum is another popular attraction, honoring the line that connected the town to Grass Valley and other points south in 1874. Around 2,800 people live in Nevada City in 2019, as the “Queen of the Northern Mines” continues her reign.