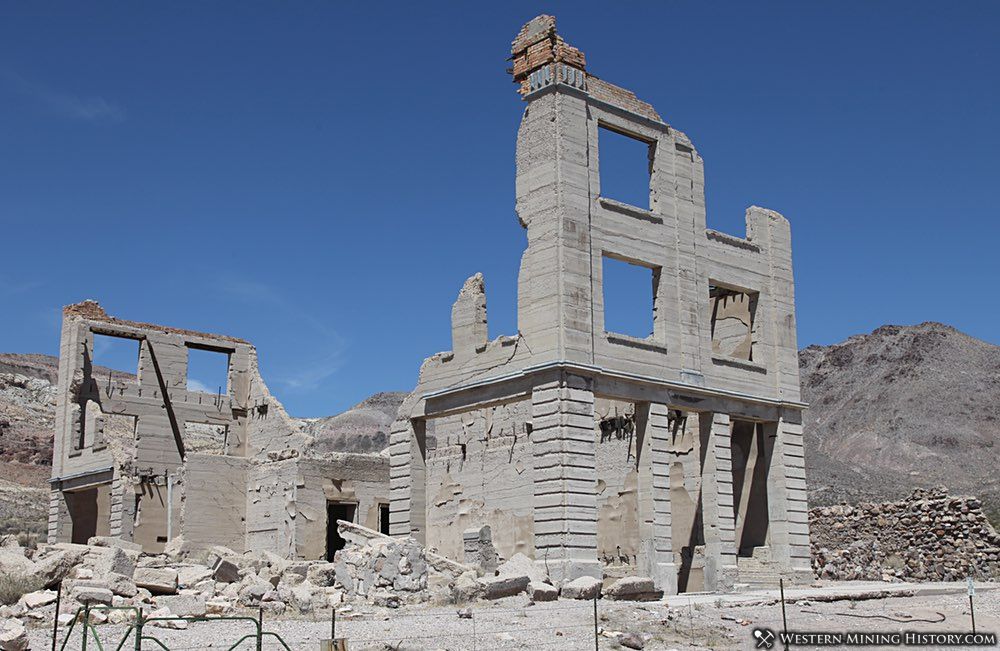 It was on the day of August 9, 1904 that Frank “Shorty” Harris made the discovery that would cause one of the greatest mining rushes of the 1900s, and make Harris one of the region’s most famous individuals.

The strike would lead to the rise of Rhyolite, one of the great mining cities of the era and one of the most dramatic boom and bust towns in the history of the West.

Harris and his partner Ernest Cross would name their claim the “Bullfrog”, a name that would would be used to describe the new mining district, the hills that the strike was located in, one of the first camps in the district, and even the overall excitement which became known as the “Bullfrog rush”. 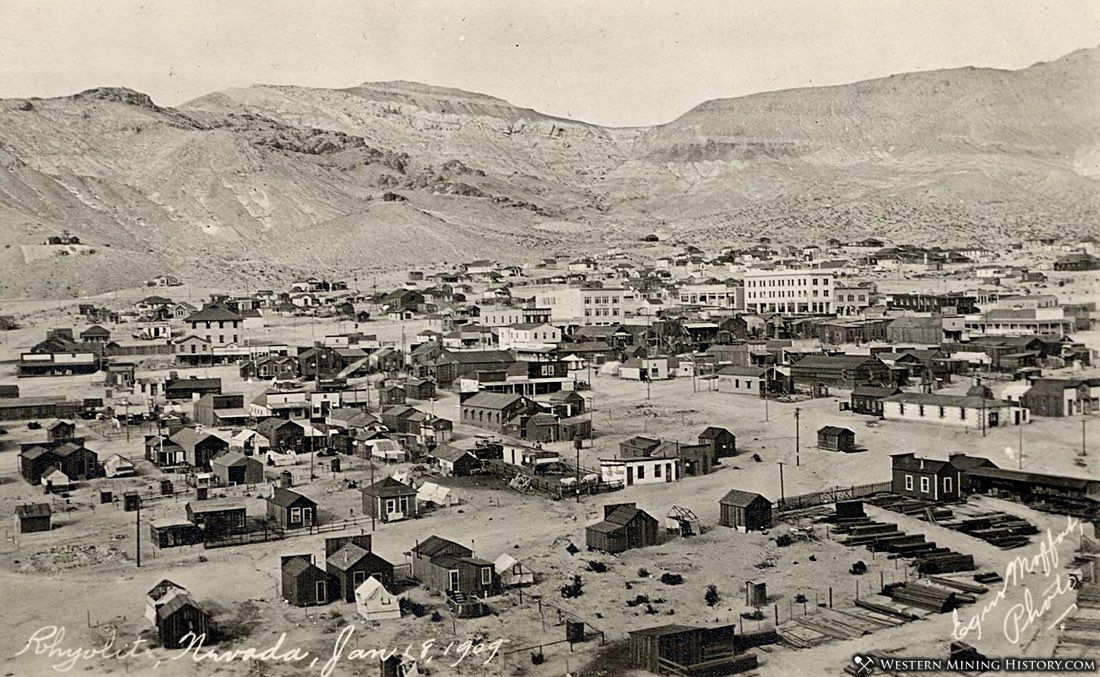 Goldfield, 75 mile to the north, had matured into a stable camp by the time of the Bullfrog strike and provided an important supply and transportation hub for Bullfrog mines and camps in a vast and desolate region that would have otherwise been extremely difficult to develop.

With the anticipation that the Bullfrog would be a rich mining district, numerous townsites were established in bids to become the district center. Promoters of these towns were hoping to cash in on the value of the land should their town rise to prominence.

At least seven townsites were established in the first year of the rush. The first of these were Amargosa and Bullfrog, situated at the site of the original Bullfrog mine. It quickly became clear that these two initial camps were at a severe disadvantage in terms of water supply, and the two merged and moved several mile to the east, taking the name Bullfrog for the combined camp.

Bullfrog was the clear leader among the initial camps in the district. The new camp had several hundred inhabitants, a post office, and numerous businesses. Wood framed buildings were beginning to replace some of the tents in the growing town.

However, by 1905, Bullfrog was supplanted by it’s new neighbor just a mile to the north. Rhyolite burst onto the scene and quickly became the district’s premier camp, destined to become the greatest city in a vast and desolate desert region.

The Rise of Rhyolite


The Rhyolite townsite was platted in January of 1905 by a group of claim owners that decided they might do better promoting a town at the site of their claims rather than working mines on them. Rhyolite was laid out with 36 blocks, and lots were initially given away to miners to get the camp started.

New discoveries placed Rhyolite at the center of the district’s most valuable mines. In February, the Montgomery Shoshone Mine was discovered north of the townsite, and would become the district’s largest mine.

By the middle of 1905 Rhyolite was the clear winner in the contest to become the district center. Bullfrog businesses began moving to Rhyolite and by the end of the year Bullfrog’s commercial district was largely abandoned.

Rhyolite was still a tent camp as summer started in 1905. In what was certainly one of the grandest tent cities in the old west, an estimated 2,000 people were already residing in the new settlement.

Rhyolite’s first and most important challenge was water supply. Three separate companies competed to bring water to the new city. Water was delivered from various springs in the area, piped for miles and stored in tanks above the city. The first water system was online in July of 1905. 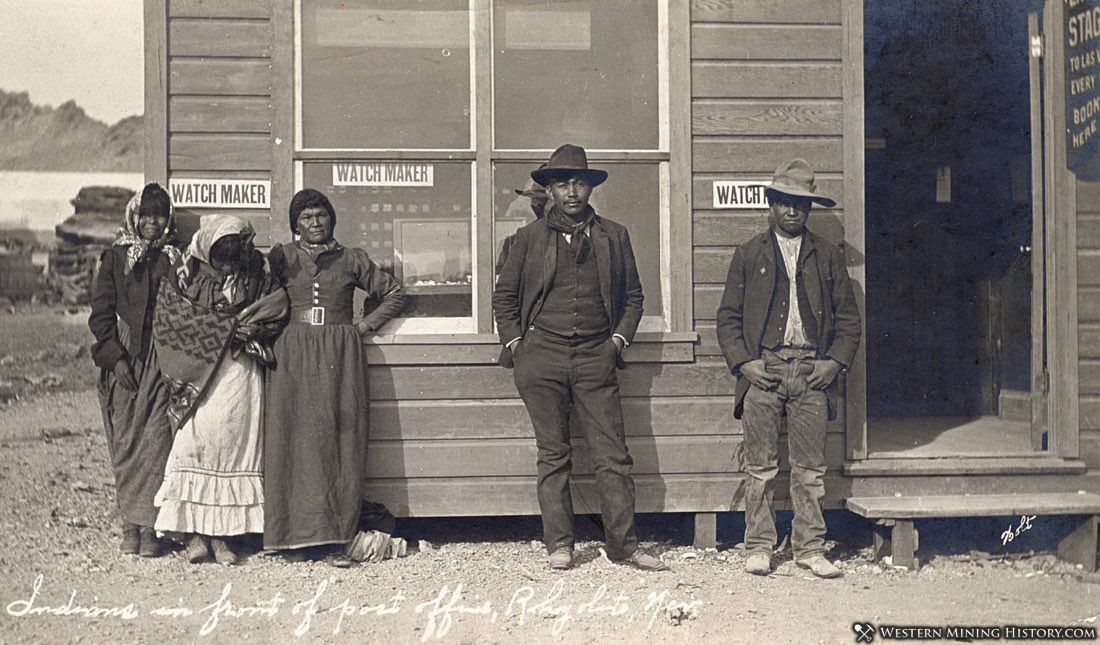 The first railroad reached Rhyolite in December of 1906. Rhyolite’s already explosive growth and development intensified with anticipation of the railroad's arrival. A December, 1906 edition of the Los Angeles Herald stated “Rhyolite is the Real Thing” and describes the “Remarkable Development of Mining Town with Coming of Railroads.”

“It now appears that Rhyolite is in the midst of a substantial boom. Building is going on at a rapid rate on almost every street in town. Carpenters get $1.00 per hour and $1.50 per hour for overtime. More than 100 carpenters could find employment here.”

“Investors and mining men are coming into the district every day. The recent strikes on the Gold Bar, Homestake, Gibraltar, Mayflower, Starlight, Tramps, Victor, and a score of other mines of rich ore has created an excitement all over the country.”

Rhyolite would ultimately be served by three competing railroads. 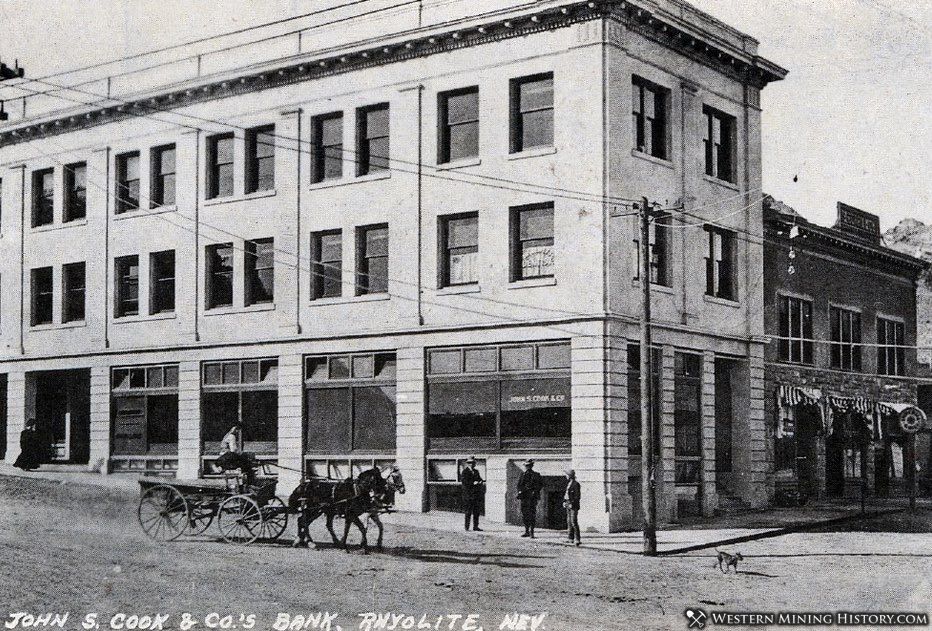 Many wood frame buildings were built during the during the second half of 1905 and in 1906. It wasn’t until the fall of 1906 that the significant rock and concrete structures started appearing that still survive as haunted ruins in the Rhyolite ghost town. 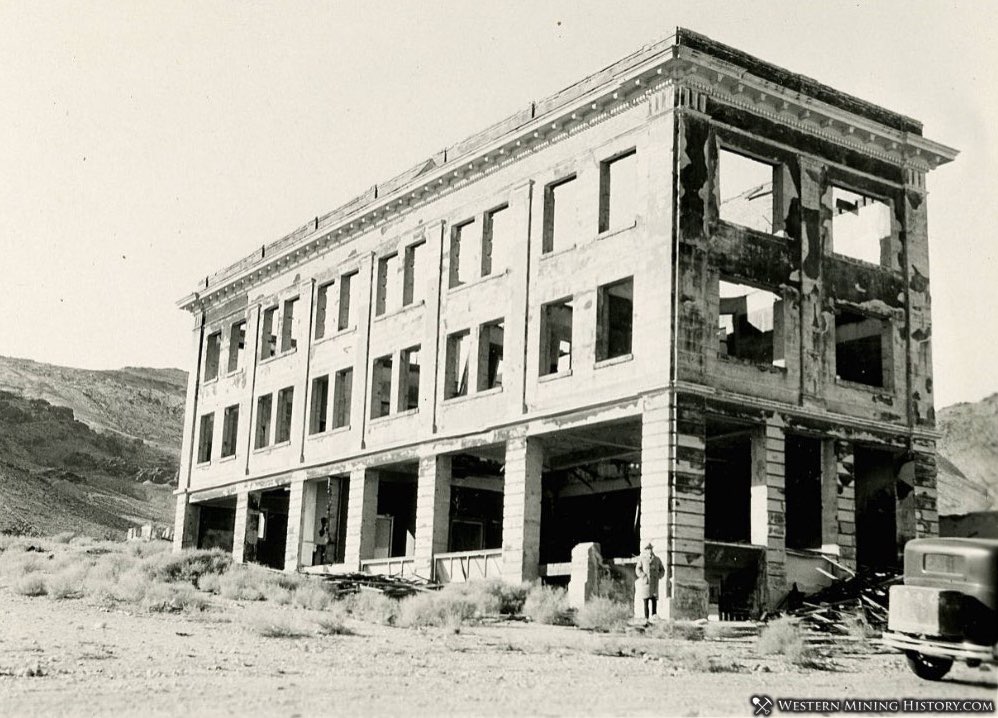 Ruin of the John S. Cook and Company Building in 1923

Rhyolite’s rise spurred further exploration and development in the Death Valley area. The rail connection at Rhyolite served to move goods into the remote region that helped build new mines and districts like Skidoo and the Keane Wonder Mine.

Newspapers of the Bullfrog district captured key events in the Death Valley mining scene, events that might have otherwise gone undocumented. For a brief period, Rhyolite served as a connection between the modern world and the extreme isolation of the Death Valley region.

Reports on Rhyolite’s peak population vary, but up to 10,000 people lived in and around the town by late 1907. 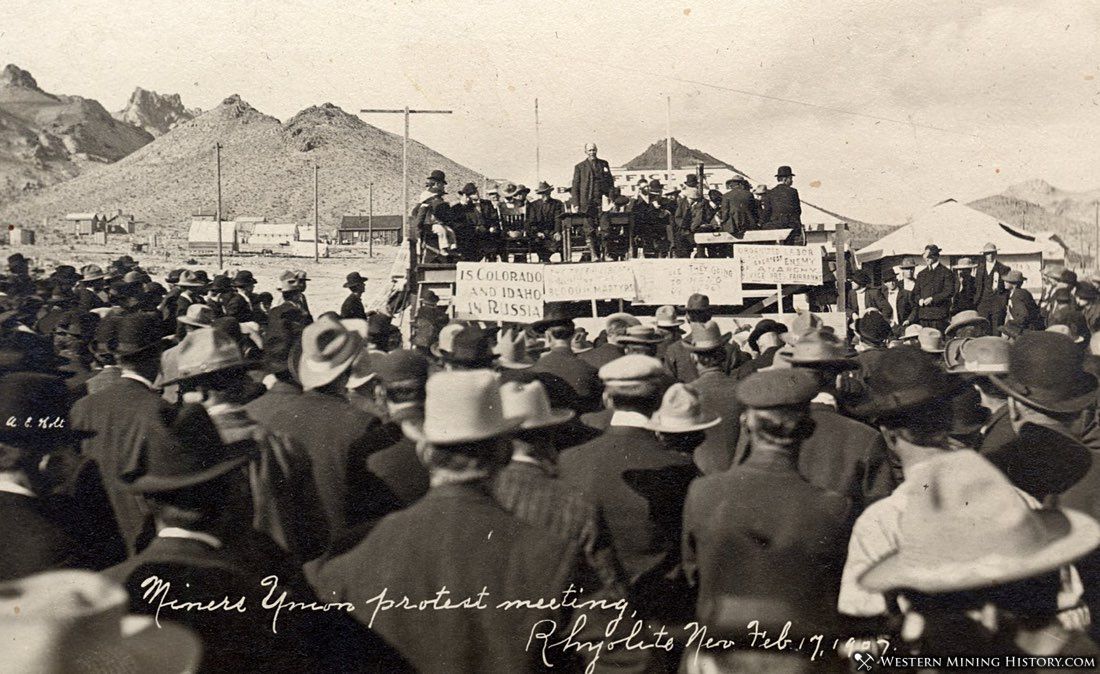 Rhyolite had evolved from a tent camp to a significant city in just two years. In 1907 the city had electricity, concrete sidewalks, water mains, telephone lines, newspapers, banks, police and fire departments, a stock exchange, an opera house, a hospital, a school, and numerous other businesses.

The fortunes of mining towns were often volatile, but Rhyolite was likely the most dramatic tale of boom and bust to fall of all the great camps in the West.

Boom and Bust in Rhyolite


The financial panic of 1907 had tightened the capital markets, resulting in little funding for additional mine development. Rhyolite was now at the mercy of its mines; If they didn’t produce the local economy would be in crisis.

There were signs of trouble in the Rhyolite mines as early as February 1908. The Montgomery Shoshone Mine, the district's largest producer, was running out of high-grade ore. By 1909 no new ore was being discovered and it became evident that the mine's days were numbered. 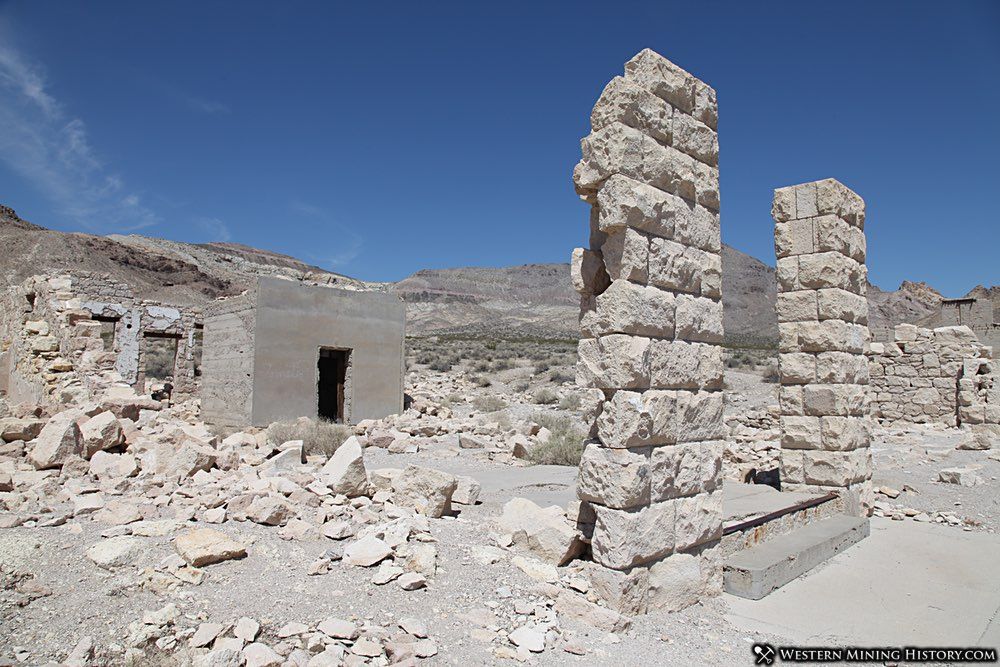 The Montgomery Shoshone operated at a loss in 1910 and closed in 1911, devastating Rhyolite’s economy.

Similar results were coming out of other mines in the district. The high-grade ore that had brought fame to the Bullfrog turned out to be in narrow veins that pinched out at depth. The lower grade ore was not profitable to mine in those days, and many mines closed. 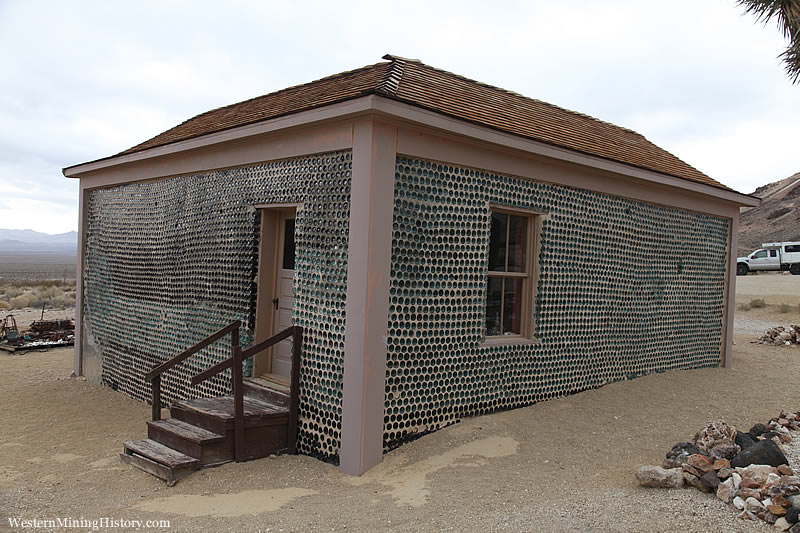 By 1910 the population of Rhyolite was reported to be 675, perhaps just ten percent of the peak population less than three years earlier. That year all three banks closed.

The last newspaper shut down in June of 1912. The post office closed in November of 1913 and the last train left Rhyolite station in July of 1914. In 1916 the power company shut down the plant and removed the lines. In rapid succession all of Rhyolite’s modern infrastructure was lost, and by 1916 the city was mostly abandoned. 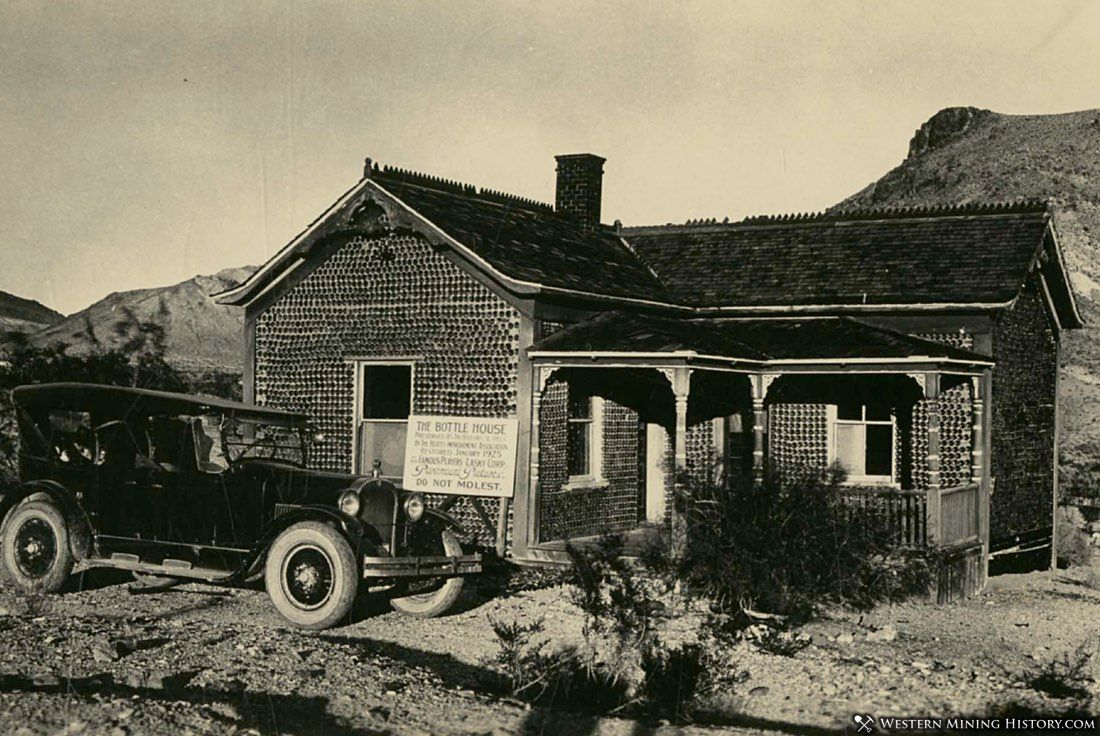 The Santa Barbara Daily Press reported on January 2, 1921 that “Rhyolite, the once thriving center of the Bullfrog mining boom of fourteen years ago, has taken its place among the ghost towns of the west. A Mrs. Dyer, proprietor of the Rhyolite hotel and her son are the only permanent residents.”

“In the height of its prosperity Rhyolite claimed a population of between 7,000 and 8,000 and was the center of a thriving region.”

“With the decline of the Mongomery-Shoshone and other mines controlled by Schwab steel interests, the prosperity of Rhyolite disappeared and now the wolves howl where once there was life and activity.” 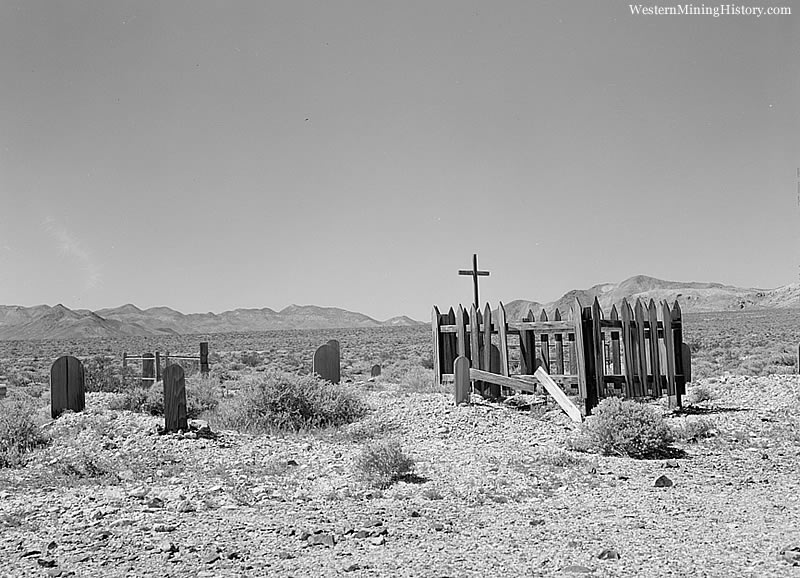 Many of Rhyolite’s buildings were moved to Beatty and other communities. The more permanent structures like the impressive three-story Cook Bank building were gutted for salvage and the significant concrete walls have been mostly destroyed by time, weather and vandalism.


Today Rhyolite is a ghost town that is maintained by the BLM. The town is a popular tourist destination and is called “one of the west’s most photographed towns”. 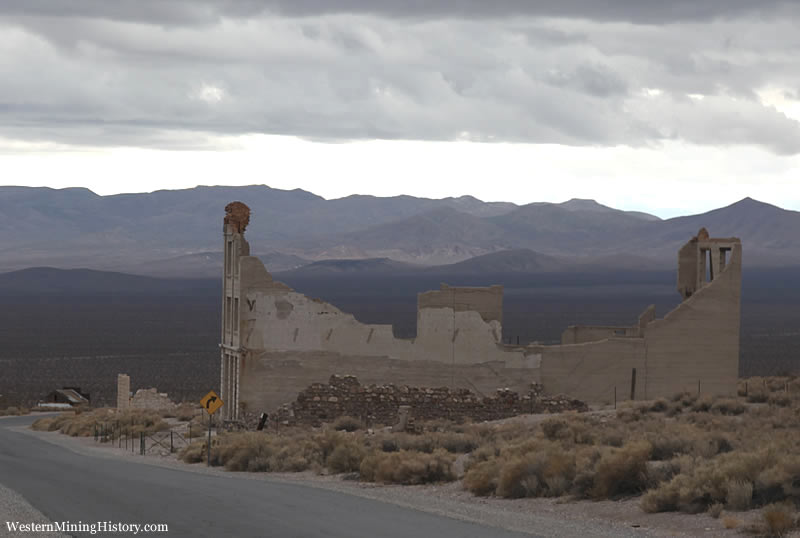 Ruin of the Cook Bank Building

Remaining buildings include the railroad depot, the ruin of the Cook Bank building, the Porter Brothers store, the school, and the famous John Kelly bottle house that was built in 1906 out of over 50,000 beer bottles.

The Goldwell Open Air Museum is just outside the town and is a sculpture park dating back to 1984 when Belgian artist Albert Szukalski created the first sculptures on display at the site. The museum has historical information on the Rhyolite site and accepts donations for a walking tour pamphlet of the ghost town.

A Collection of Nevada Mining Photos

Check out this collection of some of Nevada's best historic mining scenes at A Collection of Nevada Mining Photos.